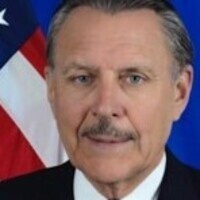 In this one-time special event, Dr. Rabil will host former U.S. Ambassador to the UAE John Rakolta, Jr. to discuss the Abraham Accords, Middle East Politics, UAE foreign policy, and the strengths and weaknesses of the U.S. State Department. Ambassador Rakolta played an integral role in concluding the Abraham Accords and pursued, with support from his wife, Terry Rakolta, a soft diplomatic approach to U.S. foreign policy in the Middle East through the advancement of art, trade, and investment. Ambassador Rakolta is the current Chairman and former CEO of Walbridge, a full-service construction and engineering company headquartered in Detroit. He has participated in Presidential elections since 1980, serving as National Finance Chair for Romney in 2008 and 2012, Michigan Finance Chair for McCain in 2012, and Trump in 2016. The recipient of many awards, Ambassador Rakolta was named the Michiganian of the Year by The Detroit News for his advocacy work for Detroit public schools. Ambassador Rakolta is a firm believer in frank, open, honest, and intellectually challenging conversations on the most difficult issues leading to success through compromise, active listening, and understanding.