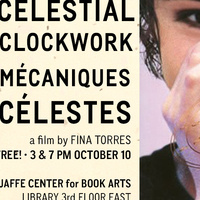 Join us for the best foreign film you’ve never seen:

As part of our programming for JCBA’s current exhibition, “Building Stories: Alternative Storytelling,” we are excited to bring you a retelling of the Cinderella tale through one of our favorite foreign films––and one we suspect you’ve probably never seen before. Ariadna Gil, known best for her roles in "Pan’s Labyrinth" (2006) and "Belle Epoque" (1992), plays Ana Mendoza, a bride who bolts from the altar in Caracas and flies from Venezuela to Paris (in her wedding gown) to realize her dream of becoming an opera star. There in Paris, the great director Italo Medici is filming an operatic Cinderella. Ana is perfect for the role, but will she fit into the glass slipper before she is deported back to Caracas? The evil, plotting, self-absorbed Celeste tries to thwart Ana, but Ana has a great team in her corner: her Russian voice coach, a wealthy lesbian psychoanalyst, a prescient gay waiter/astrologer, and a voodoo witch doctor. A film full of engaging characters, delightful magic realism… and a gorgeous soundtrack spanning Schubert to Salsa.

DIRECTIONS & PARKING
The Jaffe Center for Book Arts is located on the third floor east of Florida Atlantic University's Wimberly Library. From I-95 or the Florida Turnpike, exit Glades Road, east. The FAU campus is located just east of I-95. If you enter the campus at FAU's main entrance (the one furthest west on Glades Road... and the first one you get to approaching from I-95 or the turnpike), you will enter on West University Drive. Continue straight on West University Drive to the traffic light at its intersection with Volusia Street. Turn right onto Volusia Street. You will see a parking garage on Volusia Street, and the Wimberly Library is the next building east of the parking garage.

The new I-95 interchange for Florida Atlantic University (Exit 48A) takes you directly from the interstate to FAU. Once you pass the traffic light at Spanish River Boulevard, you are on the FAU campus on FAU Boulevard. Continue to the traffic signal at the intersection of FAU Boulevard and University Drive (FAU Stadium will be on your right). Turn right onto University Drive. Turn left at the traffic signal at Volusia Street. You will see a parking garage on Volusia Street, and the Wimberly Library is the next building east of the parking garage.

Visitor Parking is available at the metered spaces in the library parking lot; look for the spaces that have numbers posted on signs at the head of the parking space. The meter system accepts payment with cash or credit card at the rate of $2 per hour.