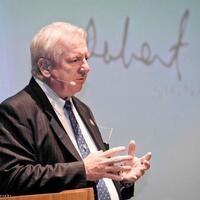 Dan Mica was FAU’s first Student Government President. He was appointed by three U.S. Presidents to various high level government positions, including US Delegate to the United Nations, Chairman of the Board for International Broadcasting (Radio Free Europe), and served as a member of the Inman Commission on Terrorism. He also served as President and CEO of one of Washington’s largest trade associations. A five-term member of Congress, Mica represented his home state of Florida from 1979 to 1989 in the U.S. House of Representatives. Robert “Skipp” Orr was confirmed by the Senate as United States Ambassador to the Asian Development Bank (ADB) in September 2010. In July 2013 he became Dean of the Board of the ADB, first American so elected in history. He served as U.S. Ambassador to the ADB until 2016. He was also President of Boeing Japan from 2002-2007 and prior to that Vice President and Director of Motorola Europe based in Brussels, Belgium. This past year Ambassador Orr was knighted by the Emperor of Japan with the Order of the Rising Sun.