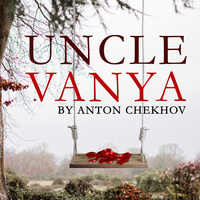 Can anything go right in Vanya’s life? He’s dedicated his whole life to a pedantic old fart who can’t get it up. That same old fart is married to the beautiful woman Vanya desperately loves. But she finds Vanya tedious and pathetic. His mama doesn’t love him, he can’t shoot straight, and the doctor won’t let him overdose on morphine. What’s a man to do to get some relief! In this sunny, funny play of desperate people, one man tries to escape his misery but his misery just won’t let go.