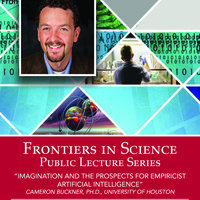 FAU Virtual Frontiers in Science: Imagination and the Prospects for Empiricist Artificial Intelligence

In current debates over deep-neural-network-based Artificial Intelligence, deep learning researchers and their critics are recapitulating a much older philosophical debate between empiricism and rationalism. Empiricism holds that all knowledge is derived from sensory experience, whereas rationalism insists instead that rational decision-making requires innate knowledge. Contemporary rationalists often attack a caricature of empiricism, however, by failing to note that the influential empiricist philosophers were all faculty psychologists--that is, they believed that the mind relied on active faculties like memory, imagination, and attention to derive abstractions from perceptual experience.  In this talk, I explore the faculty psychology of the empiricist philosopher David Hume, and show how recent breakthroughs in generative deep neural networks--such as the Generative Adversarial Networks that produce "deepfakes"--can perform some of the operations that Hume assigned to the human imagination but that his rationalist critics dismissed as appeals to "magic". The significance of these engineering achievements to human-level artificial intelligence can in turn be illuminated by placing them in the context of empiricist philosophy of mind.