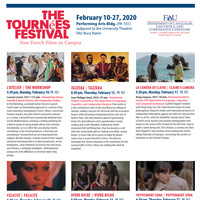 Diane Kurys, 1977 / 101 min.  Presented by Fréderic Conrod,Ph.D., FAU Department of Languages, Linguistics, and Comparative Literature: Diane Kurys’s autobiographical first film about the 1963-64 school year in the lives of two teenage sisters in Paris has reached a hallowed place in French culture: the film’s infectious mixture of nostalgia and rebellion led to an unexpected box office success upon its release in 1977 and has ensured its continued relevance to subsequent generations. In describing the rocky relationship between fifteen-year-old Frédérique and thirteen-year-old Anne, the daughters of a divorced Jewish shopkeeper, Diane Kurys pays meticulous attention to detail, stringing together a series of delicate vignettes that have the flavor of lived experience.