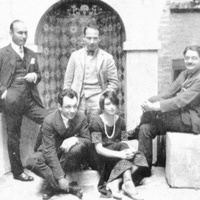 From West 44th Street to the Sunset Strip

In this 8-week course, Kurt S. Stone shows seven of the best – if not best known – movies written by the hard-drinking punsters of the Algonquin Round Table (pictured above). Their stories, scripts and films lent a spicy realism which Hollywood had never known. The first film, "Mrs .Parker and the Vicious Circle" (1994), will be an introduction to the characters that made up the Algonquin Round Table. The films include: "Topaz" (1933) "The Little Foxes" (1941) "The Scoundrel" (1935) "Abe Lincoln in Illinois" (1940) "A Night at the Opera" (1935) "An Affair to Remember" (1957) "The Enchanted Cottage" (1945)