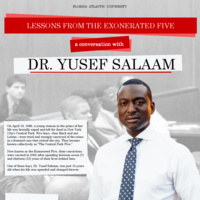 Lessons From the Exonerated Five a Conversation with Dr. Yuseff Salaam of the hit show "When They See Us"

The FAU Diversity Platform will host Dr. Yusef Salaam on the campus of Florida Atlantic University Friday, February 7, 2020 beginning at noon in the Student Union Majestic Palm room. Dr. Yusef Salaam is a member of the Exonerated Five previously known as the Central Park Five from the hit Netflix show “When They See Us”. This is the official Black History Month kick-off at Florida Atlantic University. There will be student performances, a spoken word artist, and a message from Dr. Yusef Salaam as we celebrate the achievements of African Americans by recognizing their role in U.S. history.

On April 19, 1989, a young woman in the prime of her life was brutally raped and left for dead in New York City’s Central Park. Five boys—four black and one Latino—were tried and wrongly convicted of the crime in a frenzied case that rocked the city. They became known collectively as “The Central Park Five.” Now known as the Exonerated Five, their convictions were vacated in 2002 after spending between seven (7) and thirteen (13) years of their lives behind bars. One of those boys, Dr. Yusef Salaam, was just 15 years old when his life was upended and changed forever.