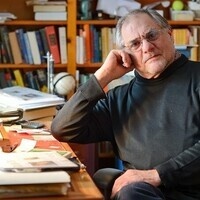 Mourning Letters for My Father and Brother

Emeritus Professor and Senior Fellow in the Department of English at SUNY-Buffalo, Howard R. Wolf, has had an enduring interest in life-writing as a critic and practitioner, beginning with a memoir, Forgive the Father. He has pursued this interest in Jewish-American life in a novel, Broadway Serenade, a play, Home at the End of the Day, and a series of short stories, The Education of Ludwig Fried. Twice a Fulbright scholar (Turkey and South Africa), a Fellow of the MacDowell Colony, and a Life Member of Wolfson College, Cambridge, he has lectured and published widely in America and overseas. He is a graduate of the Horace Mann School, Amherst College (BA), Columbia University (MA), and The University of Michigan (Ph.D.). His father, Abraham, a garment salesman, died in Florida in 1998; his brother, Sr. Dr. Ronald, lawyer and legal scholar, died in Portugal in 2018. Both had a “touch” of the poet in their souls. Howard’s talk will reach out to that touch as a form of homage.