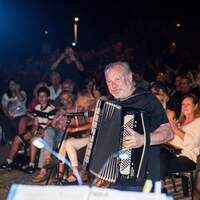 My Fulbright to Israel: Adventures in Music

Aaron Kula, FAU Library faculty and director of Music Performance and Education will present a multi-media lecture reflecting on his 2018 Fulbright award to Israel.  During his 6 week residency, he conducted ensembles, performed on the accordion, and led masterclasses in composition and jazz at the Jerusalem Academy of Music and Dance and music schools in the Negev and Western Galilee. He was invited to serve as master ceremony for a jazz concert at the U.S. Embassy’s International Center in Jerusalem and spent time with a diverse ethnic population; Israelis, Arabs, Christians, Druze, Muslims, and Jews. As a Fulbright Specialist in music, Aaron represented the United States under the State Department.