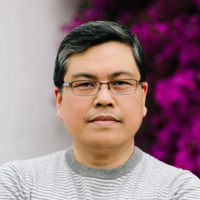 Rick Barot is this year's Mary Blossom Lee poet.  He was born in the Philippines, grew up in the San Francisco Bay Area, and attended Wesleyan University and the Writers' Workshop at the University of Iowa.  He has published three books of poetry with Sarabande Books: The Darker Fall (2002), which received the Kathryn A. Morton Prize; Want (2008), which was a finalist for the Lambda Literary Award and won the 2009 Grub Street Book Prize; and Chord (2015), which was a finalist for the LA Times Book Prize and received the 2016 UNT Rilke Prize, the PEN Open Book Award, and the Publishing Triangle's Thom Gunn Award.  He has received fellowships from the Guggenheim Foundation, the National Endowment for the Arts, and Stanford University, where he was a Wallace E. Stegner Fellow and a Jones Lecturer in Poetry.  Barot is the poetry editor of New England Review.  He lives in Tacoma, Washington and teaches at Pacific Lutheran University. His fourth book of poems, The Galleons, will be published by Milkweed Editions in Spring 2020.  He will read selections from his poetry and answer questions.