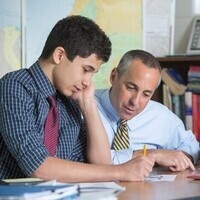 Presenting: Glenn Whitman, the Director of the Center for Transformative Teaching and Learning and co-author of Neuro Teach.

Glenn Whitman (@gwhitmancttl) is the co-author of Neuroteach: Brain Science and the Future of Education and directs the Center for Transformative Teaching and Learning at St. Andrew's Episcopal School. Glenn is a former Martin Institute for Teaching Excellence Fellow and author of Dialogue with the Past: Engaging Students and Meeting Standards through Oral History as well as co-editor of Think Differently and Deeply, the international publication of the CTTL. Glenn is also a blogger for Edutopia. Glenn earned his MALS from Dartmouth College and a BA from Dickinson College. Glenn has presented at more than a dozen, major conferences world-wide including: New Teacher Center Symposium (2018), SXSWedu (2016, 2017), Festival of Education (UK, 2015, 2017), Ideas in Education Festival (2015, 2016), researchEd (2015, 2016, 2017), National Association of Independent Schools Annual Conference (2013, 2017), National Network of Schools in Partnership (2018), and Learning and the Brain Conference (2016, 2017, 2018). Glenn’s most recent publications include: "A Bridge No Longer Too Far: A Case Study of One School’s Exploration of the Promise and Possibilities of Mind, Brain, and Education Science for the Future of Education" in Mind, Brain and Education and "Bridging the Gap Between Mind, Brain, and Education Research and Practice: One School's Replicable Model in Impact the Journal of the Chartered College of Teaching.