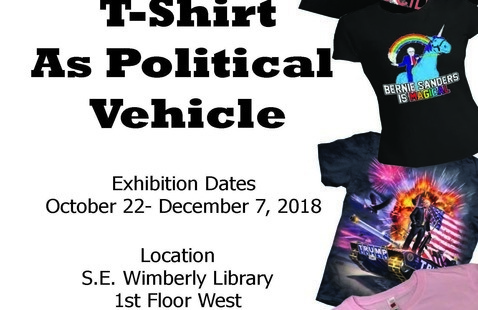 An investigation of the t-shirt as a socio-political medium, a way to merge the personal as political, and a vehicle to show one’s identification with a political movement or candidate. Since the 70s, the t-shirt as a political vehicle for political engagement or expression has been used by USA presidential candidates such as Shirley Chisolm, Richard Nixon, Jimmy Carter and Ronald Reagan. In the more recent presidential campaigns of 2008 and 2016, resounding changes to the political landscape were made in the type of candidates able to effectually participate in the process with the historic announcements of the first African American party-nominated candidate (and later President of the USA) and the first female party-nominated Presidential Candidate. During those campaigns, t-shirts produced ran the gamut of respectful to offensive as people conveyed their support or contempt for a candidate. Issues like sexism, racism, homophobia and ageism came to the fore and the freedom of expression was used to back choices. Is there a line which people should or shouldn’t cross in expressing their political affiliation? Who decides?

Lovely, thanks a lot for this