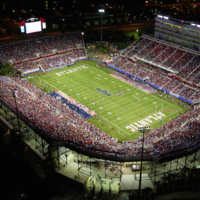 FAU Stadium is located on the north side of campus at the intersection of North University Dr. and FAU Blvd. The FAU Owls hosted the first home game of the 2011 season in the 30000 seat stadium.

For our Spring 2021 graduates, FAU will host two outdoor ceremonies on Thursday, April 29. The first ceremony will start at 9 a.m. and the second ceremony...

Student and Alumni support was great.
FAU was woefully prepared for a large crowd.
Parking was terrible, not well directed. very difficult just to get on campus to park. Took 45 minutes to park and had to walk across campus.
Getting into the stadium took at least 30 minutes waiting inline and was dangerous due to crowd pushing. There were not enough scanning stations or inspectors at any of the major gates.
The workers were doing as weil as they could.
This is an upper management failure. The planning for needed resources was either not done or just ignored. You knew days or months before that this would be a sell out .
Also ticket purchasing was difficult, you online call center was out of space and blocked, the ability to print a ticket, poor, and finding the ticket office before the game is poor.
I have been to UCF games in Orlando. They have us beat there too.

Entry into the sta

Where do I go to buy tickets for the Game???